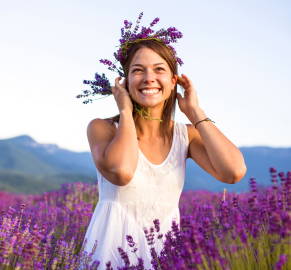 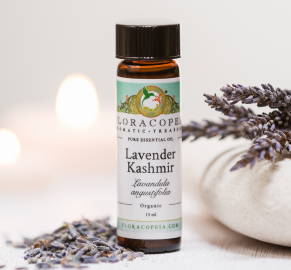 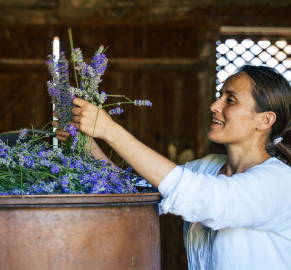 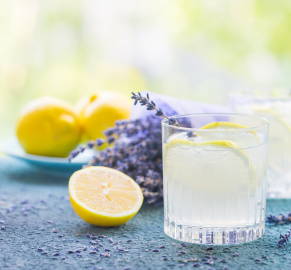 Lavender is one of the most well-known, versatile, and extensively used essential oils in the world. When we use lavender essential oil we receive the blessings of the feminine — lavender is known as an angel of healing from the floral realm, and an expression of the earth's compassion.

Lavender has a long history of use. Originally, it was an herb used primarily in European herbology, but it has now spread worldwide. When one thinks of lavender oil cultivation, images of Provence in the south of France may come to mind, where it has been grown for centuries. But lavender has migrated across the globe, and is now at home in places as diverse as northern California, New Zealand, Kashmir, and the Himalayan states of India.

Because demand for high-quality organic oil is high, lavender is an ecological crop that provides income for many people. Lavender cultivation is also a source of ecotourism, as people are naturally drawn to the beauty and peaceful atmosphere where it is grown.

What is the fragrance of lavender? You might assume all lavender oils are the same, but there are hundreds of species and varieties that create oils with different perfume notes — as well as differences produced by the soil, water, and climate. In general, lavender has a soft, sweet, and floral aroma. However, depending on the quality and place of origin, it can reveal a wide range of other scents, including hints of spiciness, fruity undertones, and green and herbaceous notes. When you smell lavenders from different places, it is easy to imagine the different elements that influence the plant: the hot summer Mediterranean days, the icy mountain winters, the spring rains.

Therapeutically, lavender oil is one of the most versatile and safe of all essential oils. Its wide spectrum of benefits are calming and relaxing, cooling and anti-inflammatory, antibacterial and immune enhancing, and hormone balancing.

Lavender enhances the healing powers of the body: it is effective against colds, flus, and infections, and is used specifically for burns. It has pain-reducing properties, which, because of its feminine nature, are more pronounced in women than men. Lavender's pleasing fragrance and skin-regenerating benefits make it one of the most commonly used oils in cosmetic and body products.

Lavender is safe and effective for children, who are more sensitive than adults and therefore more susceptible to its soothing influence. Used in diffusers in the home, it creates a background scent that calms hyperactivity, excitability, and irritability of both parents and children.

How would yogis and yoginis use lavender? In Ayurvedic terms, the effect of lavender oil could be described as pacifying to the vata (calms, relaxes, and restores the nervous system) and cooling to the pitta (anti-inflammatory). It is a highly sattvic oil, meaning that it purifies aggravated emotional states and helps bring mental peace.

Use a few drops in a diffuser at the end of asana practice to make the transition into a calm state of rest. A few drops in a bath afterwards will refresh your mind and support the purifying effects of the asanas. If you’re sitting down to meditate after a busy day, sprinkle a few drops of oil on your palms and inhale the fragrance. This will assist in making the transition from an active state of outwardly-focused sensory stimulation to an inward state of absorption and mental serenity.

Sprinkle a few drops on the pillow and sheets before starting yoga nidra, yogic sleep. The fragrance of lavender will make it easy to imagine beautiful scenery and peaceful visions before drifting into sleep. The combination of this fragrance with meditative sleep will give deep rest to those suffering from insomnia, and will assist in waking up refreshed and renewed.